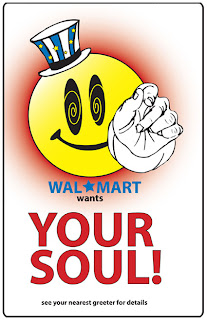 Wal-Mart may already have my soul. It's probably my second favorite place to shop (after the immortal Costco, subject of my last blog).


What is impressive about Wal-Mart is that the prices are incredibly low and you don't have to purchase "big box" quantities of everything to get a good price. But there are a few things that stand out about Wal-Mart, both in "good" and "bad" ways, which are:

Maybe, as the character Gordon Gecko said in the movie, Wall Street: "Greed is good." At least as far as Wal-Mart goes. And for all of the bad things that Wal-Mart does, its customers are buying "stuff," as Thomas Friedman says in his columns, not just risky ideas, such as reverse credit swaps, derivatives, and similar products that brought America, and the entire world economic system, to its knees.

Somebody out there is planning the next Wal-Mart right now, a gigantic institution which will make "stuff", and thus employ thousands of people, or sell "stuff" to the millions of consumers of American products around the world, to help accentuate the economic recovery we are all craving. Whoever it is, go for it. America needs you!

Posted by Paw Prints at 8:07 PM No comments: I'd like to say a few words about shopping at Costco, one of my favorite places to visit (and where I regularly spend a high percentage of my income). Outside of having such a great selection of products at great prices (provided you are willing to fill your residence top to bottom with huge quantities of toilet paper, paper plates, plastic trash bags, et al.), it is hard to match the excitement that is offered by this fine establishment.

Excitement? What can be exciting about going to Costco? Plenty, as follows:

You've got to love it. Shop 'til you drop!
Posted by Paw Prints at 7:05 PM No comments: