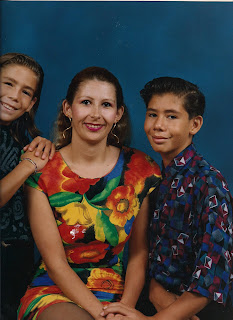 I would like to say a few words about the passing of our friend, Angela Roque, who passed away on September 24. Angela, who is pictured here with her kids, Bobby and Stevie, when they were little, was a wonderful friend of ours for many years.

She was a warrior who battled a particular nasty type of cancer, non-Hodgkins lymphoma, for over fifteen years. When she first told us that she had cancer, she did not show any fear or resentment about being struck with a such catastrophic disease at the young age of 37. She simply faced up to all of the frustrations and pain of having to deal with this disease with courage and dignity at all times, whether it was having to deal with chemotherapy, radiation, and a Pandora's box of drugs, therapy, doctor's office visits, and hospital stays.

In her mind, there was never a question of if she would beat cancer, it was just a question of when she would be done with it. Her doctors told her that her case was hopeless years ago, but she would time after time, shrug off their negative feedback, keep her chin up, and fight the disease. Her situation was particularly cruel because she was told many times that the disease was in "remission," but although many of us might equate "remission" with defeating the disease, it would just come back one more time, over and over and over. And Angela's reaction would, of course, be to just shrug her shoulders, and tough it out once again.

Angela raised her two kids on her own, managed to earn a good enough living to always send her kids to good schools, and live in good neighborhoods. Her kids have grown up into being handsome and intelligent young men, who are both earning a good living, and building families of their own.

When we heard that Angela had once again entered the hospital, in Phoenix, about six weeks ago, we had learned to subscribe to her way of thinking, which was that, of course, she would just beat this thing one more time. Only after she had been there for a month did we realize that this, finally, would be a battle that Angela, for the first time, might not win.

When she passed away last Thursday, she again showed strength and dignity. In fact, when my wife, Vicki, who considers Angela one of her closest friends, arrived at the hospital in Phoenix, at about 7 pm, after flying there from San Diego, Angela finally succumbed, at the young age of 51, a mere twenty minutes later. Everyone in Angela's family who was there told Vicki that Angela hung on to life until she got there, and I truly believe that this is what happened.

Angela's strength and courage are what marked her life, and made her a role model for all of us. She was a true warrior, and we will all miss her greatly. She will truly be a hard act for any of us to follow.
Posted by Paw Prints at 6:20 PM 2 comments: