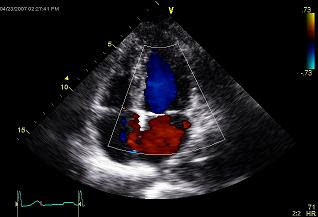 On the path unwinding
In the Circle, the Circle of Life.

I would like to take this opportunity to have my own Academy Awards ceremony, in honor of my appointment at Scripps Clinic in San Diego, on Friday, April 10, for my first echocardiogram. Envelope please.

My aorta and my heart. The room erupts in applause. The acceptance speech: “You like me, you really like me. (Sally Fields, for either Norma Rae or Places in the Heart, I can’t remember which).

I must admit that I have never really paid much attention to your years of hard work, your devotion to my survival, your tolerance of my good moods and my bad moods, as well as the stress I put you through in my athletic endeavors: my years in Little League (probably the highlight of my athletic career), my years of playing tennis (and endlessly annoying my parents in all of my misplaced shots bouncing off their heads and arms), my walking, running, sitting, sleeping, and all of the many activities I have engaged in where you, never, pardon the pun, “missed a beat.”

As I lay on the table, on my side, I had the pleasure of watching my heart on the monitor in glorious three-dimensional color, top view, side view, and other views, as I looked at the four chambers in thumping, head-pounding sound blasting through the speakers. I have heard hearts before, but only the baby hearts of my kids. To hear my old heart still pounding away was quite surprising and amazing. It certainly was nothing that I took for granted, after my brother’s tragic passing two weeks ago from congestive heart failure.

I also greatly enjoyed the instructions from the technician. He became frustrated at my taking in deep breaths and exhaling in big breaths. His choice was to tell me to take in half a breath, and then exhale half a breath. I work in accounting, so I tried to visualize what he was saying in numeric terms: each breath in would be equal to .5 times breaths (B), or, in algebra, .5B. Similarly, each breath out would be equal to -.5B, so, for each round of this excitement, the calculation would be .5B-.5B, or zero. Therefore, my entire session probably came out to be something like (30) (.5)(B)-(30)(.5)(B), or, put simply, zero. (Dad, I hope you are reading this, because I remember how you taught me algebra for Mrs. Champion’s class in 7th grade at Malaga Cove Intermediate School, and your asking what it would take for me to think in algebraic terms).

The most puzzling request from the technician was the one where he said “don’t breathe.” He said this repeatedly, after my engaging in the half breath in and the half breath out routine several times, in order to get a clear reading on the screen. I seriously pondered his request, and although I deciphered his true intention ("please breathe more quietly"), I thought about what it would take for me to truly quit breathing. I could try holding my breath, although I am not sure how long I could do that (one minute or two at most, although probably Michael Phelps could hold his breath a lot longer, not counting, of course, when he commits that great sin of using a bong). I also thought about getting one of those large plastic bags in the office and pulling it down around my head, just like you see in the gangster movies, where they cover up a bad guy’s head, pull down on the bag, and he dies seconds later). I decided that was not practical either, because I would have to unhook myself from the echocardiogram machine, which would really annoy the already irritated technician.

By the time I was through pondering these existential issues, the technician was relieved to tell me that the procedure was over. I pumped him for information, without success, but he finally relented and admitted that he was not wheeling me into the emergency room nor bringing in the cardiologist for an emergency consultation, so I am presuming that meant that the results were, at least, decent.

Seriously, 2009 has been a year of incredible highs and lows for me. In my personal life, in March, I have been up and down with one brother’s wife giving birth to a beautiful baby girl on March 9, and then, about two weeks later, my other brother tragically and unexpectedly dying. At work, in one week, one of my coworkers lost her husband and another one lost her mother-in-law. Two of my co-workers have been operated on for cancer, and suffered through chemotherapy and radiation since then. And yet, on the other hand, this week, two of my male coworkers were given showers for the upcoming births of their baby sons.

As Elton John says, we experience a "circle of life," as we suffer through illnesses, death, world starvation, war, et al, and yet we also get to experience the many joys of life, such as being with family and friends, and the many wonders of life, such as the births of beautiful children. (As any parent will tell you, there is nothing more beautiful than a newborn baby.)

Today, as I get to experience another day, I have an attitude of gratitude that my body allows me to be here. Suffering the shock of a loss of a family member has made me even more thankful for what I have. I will do my best to "accept the good," as was said in the movie, "Things we Lost in the Fire," with Halle Berry, and try not to dwell on the inevitable sadnesses that we all suffer though in our lives.
Posted by Paw Prints at 3:40 PM